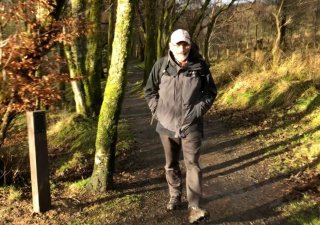 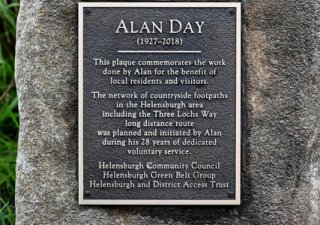 When you're out on the route near Helensburgh keep a lookout for Alan's plaque and boulder. The plaque was recently installed to commemorate Alan Day, the man who first conceived the vision for the footpath network around Helensburgh and the Three Lochs Way long distance route. He worked tirelessly in pursuit of these aims and the Trust continues to develop the ideas he first initiated almost 30 years ago. Thanks for a great idea Alan. 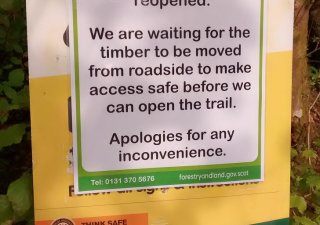 Update September 2019 - Forest & Land Scotland have now reopened the path between Tarbet Railway Station and Arrochar village. This is a lovely, mostly shady, section of the route. The path is a bit narrower than it used to be due to lack of use but we expect that will change now that it has been completely reopened. 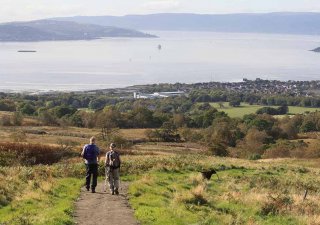 Week commencing 28 August 2017 will see improvement work start on the path at the Camis Eskan Estate by the Red Burn through Quarry Wood and above the new forest road. Please keep clear of any operating machinery and heed any advice from the contractors. The Access Trust has received a very generous contribution from Scottish Natural Heritage to pay for these improvements. The Trust itself contributed £3K - a lot of money for us - so please make donations on Paypal button or buy a guidebook. All proceeds go to pathwork. 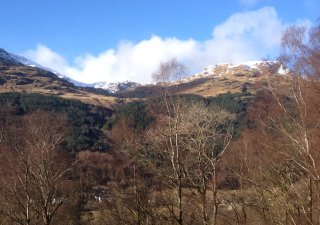 PLEASE TAKE CARE and be well prepared for being out doors!
Unfortunately the freezing conditions today (25 November 2016) resulted in a 3LW walker slipping on ice, on the track above Arrochar, where water had been running over the path and frozen (verglass), with no thawing over the last few days, as the sun is low behind Ben Reoch all day.
The lady was fit and agile but tried to cross from one side of the track to the grass on the upper side and fell heavily, which we later found to have broken her hip, being an elderly walker and more vulnerable to such an injury.
The alarm was raised by a companion on a mobile phone and an Ambulance Crew along with Police and Local Mountain Rescue Team members successfully extracted the casualty from the track, transporting her to the RAH in the early afternoon.
So please be very careful on the icy sections, as recovery can take some time following an emergency call, given the awkwardness of some locations and time it takes to muster the services to a scene.
You' need to remember that in these conditions you should carry extra clothing, a hot drink and possibly a walking pole or long handled ice axe for an extra point of contact. Despite having extra clothing and using their daysacks to insulate the fallen walker, she was pretty cold by time she was put onto the MRT stretcher for onward transfer to the Ambulance at the Tarbet track end.
Anyway the lady was comfortable and in good spirits as she was taken onboard the Ambulance.
With thanks as always to Ambulance Scotland and Arrochar Mountain Rescue Team. We are lucky to have these services available. Thanks. 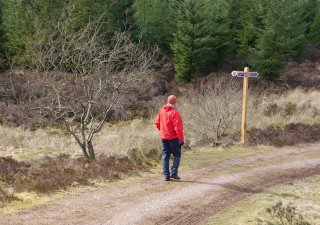 Harvesting of the forest is underway in the Bannachra Plantation between Helensburgh and Balloch. This means that walkers and bikers should expect to encounter large lorries using the forest road and that there will be harvesting equipment in the nearby conifer woods. Please understand that the workers are only interested in your safety and that we would probably not have a route to walk over the hill were it not for the existence of the forest roads in the first place. For your own safety you may therefore be asked to wait a little while if operations are likely to compromise your safety on or near the road.

The harvesting operations over the whole plantation will continue well into 2017 but since arrangements have been made to harvest the higher sections on the hill first this will have less input as time goes on to the shared route section of the Three Lochs Way and the John Muir Way which at present is in any case diverted onto the Three Lochs Way between Helensburgh and Balloch.

The landowners have been helpful in facilitating public access in this area, but please note this is a private road and it should not be used by motorised transport of any kind without the permission of the owners. Parking is available nearby on Collins Road, Drumfork Road, Waverley Avenue and Cardross Road. 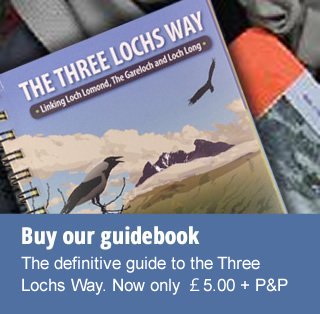